A quick note: Yes, yes, I know that Japanese writing isn’t only Kanji. They also use Hirigana and Katakana, often in combination. I’m just using Kanji as shorthand in the title.Adding Japanese writing to your comics and designs is increasingly popular, and when doing Manga, it also adds to the mood of the comic. You know you want to do it. But you don’t know what the words are, much less how to draw the characters. Here’s a shortcut.
Step 1: Find the Japanese Text You Want to Use

Once you have your dictionary, you can look up any word you want to use and follow this tutorial. I’ve included a sample file for you to use while waiting for your dictionary to arrive. Click here to download the tutorial file manga.tif, which is the Kanji for Manga.

Step 2. Scan and Prep Your Image

These dictionaries use very small type sizes, so when you scan, you’ll want to scan at a high resolution. I’ve used 1600: It blows up the image without losing quality. I’ve also scanned in grayscale (your scanner may refer to it as newspaper). The more pixels Illustrator has to work with, the better your scan will be. I’ve also chosen TIFF as my output format, since it’s a lossless format and gives a clearer picture than JPEG. My scan looks like this:

Remember, if you don’t have a Japanese-English dictionary to scan from, download manga.tif to do the tutorial.

Live Trace works much better when it has cleaner images than this. You certainly don’t need the gray paper look in the background. Let’s make the image pure black and white. In Photoshop, choose Image>Mode>Bitmap (if you’ve accidentally scanned as an RGB or CMYK file, you’ll have to convert to Grayscale first, then to Bitmap). Set the Bitmap method to 50% Threshold: Anything lighter than 50% black becomes white, anything darker than 50% black becomes black. You’ll get a pure black and white image such as this:

It may look a bit raggedy, but the Live Trace settings can help you smooth this out. Save this file as a TIFF (you’ll keep the file quality) and we can move on to Illustrator.

Open Illustrator CS2 and create a new document. Use File>Place to insert your TIFF image from Step One into the document. Zoom in so you get a good view of your Japanese characters: Seeing the whole image clearly will help you get the best possible trace. Select your image with the Selection tool (the black arrow). Then use Object>Live Trace>Tracing Options. You’ll see the following panel: 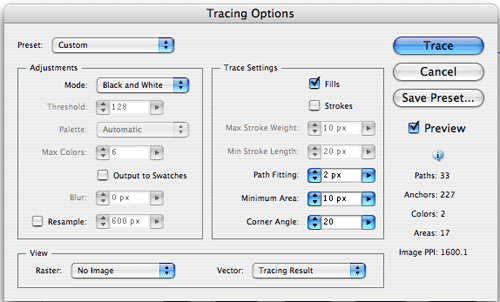 When you click the preview button, you’ll see what the final effect of the trace will be. Unchecking Preview shows you the original file. This is very useful for changing settings and previewing until you get the results you want. For this file, you’ll set Mode to Black and White (since the image is pure black and white), and you’ll set Trace Settings to Fills (this is better for large areas of shapes, such as these Japanese characters). Some other settings to play with include:

Path Fitting: The lower the number, the tighter the trace follows the original image. This can create a jaggy image, setting the number a bit higher can smooth things out.

Minimum Area: Sets the minimum area that will be traced. This helps avoid tracing of little specks and such. If you set minimum area to 10 px, an area of 9 px or smaller won’t get traced.

Corner Angle: Sets the sharpness of corner angles. The lower the number, the sharper the corners.

Remember, use the Preview button to compare your trace to the original as you adjust the settings. When you’re happy with the Preview image, click the Trace button. I used Path Fitting: 2 px, Minimum Area: 10 px and Corner Angle:120. Sharp corners don’t give the calligraphy brush look of traditional Kanji writing, so setting the corner angle number higher gave a better match.

(note: As of CS3, Live Trace has an “Ignore White” option on the Tracing Options panel. This will cause the trace to ignore white parts of the image, removing the need to follow this step. Just check this option if you don’t want white included in your final trace.)

You’ve got an infinitely resizable vector image of your Japanese text now. Depending on what you want to do with it, you might even be done. But when Live Trace traced your image, it traced the white areas of the image as well as the black areas. If you put the Live Trace image over top of other things, the white areas will cover anything below. In the following image, I’ve turned the white areas red so you can see them clearly:

Remember, you won’t see the red in your work. I’ve just put it there because you can’t see the white areas as easily.

If you want transparency around the black areas, you’ll need to do a few more simple things.

First, you’ll need to make this an ordinary object rather than a Live Trace image. Select the image, choose Object>Live Trace>Expand. This removes the Live Trace effect while maintaining the appearance.

To make sure that you don’t separate the different parts of the characters, select any part of the image, Use Select>Same>Fill Color and then Group everything using Object>Group.

Do you want to master Adobe Illustrator, a power tool for creating exciting works of art? Austin-based Square Bear Studio provides tutoring in mastering this complex program, either in person in the Austin area or remotely through Skype. Contact us for more details.